Howdy Friends, Hope you all are fine. Internet Technology is growing day by day and so the Websites are. Large no. of webmaster are registering new websites daily with hope to earn online. But when it comes to online earning the Ad-Network that comes into mind is not other than Google Adsense. But if look into Google policies and their process of banning accounts especially from India, then it looks like very strict with the webmasters, even strict than your teacher. After getting banned it’s very hard to get it again. So what all webmasters do is ,that they search for alternatives for Adsense. Many of the webmasters had posted about Adsense alternatives on their blogs already. But  I am going to post about the worst Ad Networks that should not be treated as Adsense alternatives ever.

In the alternative list this is always found to be at the top position and some people even claim it better than Adsense. I tried Adbrite myself and  on the space where the ad code was pasted,I do not find any ads but An “Advertise Here Board”. It does not look like an ad network at all but it looks like a Ad Network which allows your visitors to place ad on your website. 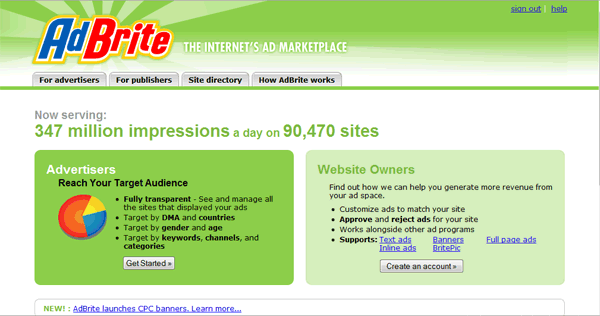 The reason is quite obvious “Lack of Advertisers”. The Adbrite appears to have lack of advertisers at least for your newly created or small website. I Think Adbrite is responsible for the quote “Rich is getting Rich and Poor is Getting Poor”.

Chitika is the next one. I have seen many users using their ads. So from these users Chitika appears to be the next alternative but again if you have small website then you also need to aware from this ad network. When I used their ad network the only ad I found on my websites was of  “Answered-Question.com“. Seems that they have only one Advertiser in their database.

Ad-Network with Good Alexa ranking and with a good no. of users but worst than above mentioned as well. They immediately approve your site and that’s why they are growing fastly but their ads make your Site speed low and visitors also treat your site as spam because the pop up keeps coming and it harass all the visitors. They even do not show Contextual ads and mostly ads are found to be adult ads. Even for each click they pay you pennies. So what is the benefit of going with this worst network? Do not decrease your site reputation with their so called “Contextual Ads”.

Bidvertiser is  another alternative suggested by webmasters but again similar to Chitika, Clicksor. I used their ads on my website and I was able to get a click on their ad from one of my website visitor from US. The money I got from that click was only .003$.I kept using it and after 40 clicks earning was . 50$.It means it will take 40 clicks to reach that earning which I can get from just one click in Adsense. So is it Adsense alternative????

It is in text advertising and turns the keywords to ads. It is used by the users along with Adsense. But the question is that should we use it if we do not have Adsense. The answer is no. First of all the CPC is worst. I t gave me an average CPC of .07 $ when I used it.

Earning is one factor to avoid using Infolinks but the other important factor is your SERP lose. Because it turns keywords to links so your site may be treated as spam by Godfather Google. Many webmaster had already claimed the same happening with their website.

Also some webmasters had even claimed their payment hold by infolinks. Rafay atRafayhackingarticles.net had posted about the game played by infolinks with him. So justify yourself, is it Adsense alternative?

It is also in text advertising but following the steps of infolinks. No doubt when I used it,then I Found it better than infolinks, but the matter is about Adsense alternative. Kontera gave me average CPC of  0.10 $ but again not more than Adsense.

The list is based on my personal experience of the ad networks on my websites. I made this list so that you should not waste your time and most importantly the space on your website by these ad networks. If you do not have Adsense then I shall suggest you to keep patience and keep posting good content. If you have plenty of original content then is not any reason for Google to disapprove you. Also if you work within their policies than Google will be your best Friend.

It is new ad network about which I cam to know from the Facebook ad. I immediately opened their website with lots of hopes and with all those hope I joined the network as well. But when I used it I found it similar to other ones. I could not find any use of this ad network other than placing it on no.7 in this list. You may not have heard about this so far, because it is a new ad network with new promises as well. But is also like other fishes of Ad networks sea, which needs you to have majority of USA traffic to earn some bucks,

Honestly, I did not try it myself, but came to know about this ad network from one of my friend. He used it on his website and found it as a dull ad network and also suggested me to not to waste my time over it. So I did not try it and will suggest you also to not to waste your precious time on it. Because the other user reviews and popularity of the website are also witness of this truth face.

Earning money from blog is every blogger’s dream but these type of Ad network are spamming them by giving only few bucks for their hard earnings. It is only Google who knows the value of Blogger’s hard work. So better go for Adsense and use it according to their policies. If you are not getting approved for Google Adsense, then better is that you spend your time in creating great and valuable content and not in these type of cheap Ad Networks, which are so called the Adsense Alternatives.

New Wireless Headset Systems for the Office, PC and Bluetooth