Wireless headset systems for the office, computer and Bluetooth provide hands free communications to increase productivity.  Over the past few months there have been some great new wireless devices to surface in the industry including new features such as multi-connectivity.  Manufactures such as Plantronics and Jabra have come up with a way for a single wireless headset to connect to multiple devices such as desk phones, PC computers and now Bluetooth devices.  This breakthrough technology is changing the way businesses communicate in the office and call center.  Using a wireless headset is pure luxury and through this blog we will review some of the best new wireless headsets on the market. 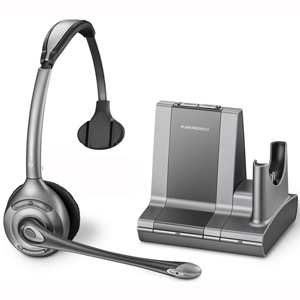 Earlier this year Plantronics released the new CS500 Series wireless office headsets and we must say they are over delivering at this point.  Including the new Plantronics CS510, CS520 and CS540 systems they are truly eye opening when you first see them.  Plantronics unveiled a new “All Black” design adding a luxurious touch for your office or call center.  There will be a fourth in the series with the Plantronics CS530 wireless headset but it has yet to be released.  With the new systems being released Plantronics discontinued most of their older systems such as the popular CS55, CS70N, CS351N and CS361N.  However there is a similar trend with the new wireless headsets when compared with the older models.  All of the new Plantronics CS500 series wireless headsets have been rebuild and designed after the first generation CS models.  When looking at the Plantronics CS510 you will find that the wearing style is exactly the same as the CS351N thus this is the model that replaced it.  Besides the new look most wonder what has really changed under the hood.  Plantronics unveiled a new 350 foot roaming range which is 50 feet greater than the older models.

The new Plantronics CS540 wireless headset has really caught the eye of consumers as retailers have been selling this model like mad.  Perhaps what is most appealing is the convertible design that features both over the head and over the ear wearing styles with an optional behind the neck band sold separately.  With the Plantronics CS540 replacing the popular CS55 it really had big shoes to fill as the CS55 is one of Plantronics all time best selling telephone headsets.  The Plantronics CS540 includes superior noise canceling technology as well as remote answering functionality with the HL10 lifter.  Built lightweight and durable ensures all day comfort also including a battery life of up to 7 hours of non stop talk time.  Any of the new Plantronics CS500 series wireless office headsets work excellent and are compatible with most desk phones.

The biggest news this year for Plantronics are the new Savi wireless headsets that can connect to the telephone, PC computer and now Bluetooth mobile phones. Always staying ahead of the curve Plantronics has introduced new technology allowing to use a single headset for all communication devices.  Included in the new Plantronics Savi family are the W710, W720, W730, W740 and W745 wireless headset systems.  The Plantronics W740 and W745 cordless headsets allow to change the battery while on a call which virtually give the systems unlimited talk time.  With all of the recent changes over the past few months we wonder what will Plantronics come out with next?  One thing for sure is Plantronics seems to be moving in the right direction with their new products and there is no wonder why they are the industry leaders in telecommunications.