The reputation of Android has increased and impressed software developers all over the world.  Studies have shown that Android has gained considerably more percentage regarding ad impression shares as compared to iOS.  The development of Android has increased tremendously in only a few years.  The iOS was always to thought to be a strong competitor, but Android OS has challenged them with their user friendly platform and many other improvements.  Cell phone or tablet, Android has made a huge impression in the industry of personal electronic devices.  The compatibility and flexibility Android offers is second to none among operating systems. 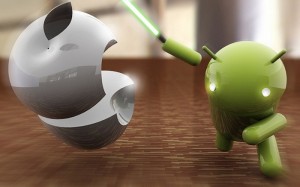 Android has more dependable features that iOS fails to bring to their consumers.  For one thing, Android is an open source platform.  Users are able to customize it according to their own convenience.  One of the biggest differences between Android and iOS is the price.  Android products are way cheaper than iOS.  In addition, there are many Android platform devices to choose from.  These features are what give Android the upper hand including the quality, flexibility, and reliability of the apps of Android has to offer is much greater than iOS.

Top 5 Reasons To Choose Android and not iOS

If your undecided on whether to choose Android or iOS, here are 5 reasons why Android should be your choice.

1. Android allows any app to run on their platform.  The iOS platform apps are only limited to those that are available in the App Store and nothing else.

2. You can customize the Android platform to your own preferences.  You can make your own theme and install it in cell phone.  The iOS however, cannot give you this feature.  Themes an options that iOS has to offer are very limited.

3. Devices with the Android platform have more hardware choices.  You can configure hardware on Android and in the iOS, you cannot.

4. Customized ROMS are available for the Android platform.  This feature is only on Android phones and tablets.  Through rooting, you can customize your Android operating system according to your preferences and needs.

These features alone show that the Android platform has the edge when compared to iOS.  Android still continues to develop even more innovative and new technologies.