After breaking a great deal in its Q2 result, Microsoft is charged up to surprise the smartphone users with its Lumia 650, which it has just launch at the first day of this week. Another economical device, designed with style and efficiency is available in the market at a price of Rs. 13,000/-. This pocket friendly smartphone from Microsoft features a great change in the look of Lumia devices, which can be a plus point for the Redmond based tech hub. 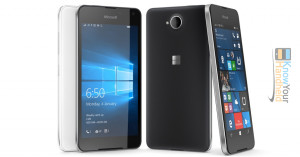 Particularly designed for the India’s target audience, Microsoft has unveiled the name of this smartphone in the upcoming list of smartphones in its Indian website. Unfortunately this amazing economic Microsoft Lumia 650 smartphone is available in the list without any mention of price with it. According to the tech experts, this device is efficient to create a balance between the daily needs of technology in personal and professional field of use.

The latest mobile phone news refers that unlike most of the Windows 10 devices, this device also unveils Microsoft suit of productivity apps, which includes Office, OneDrive and Microsoft’s Personal Assistant. Comes with 2G, 3G and LTE network support, this Windows 10 based Microsoft smartphone has the Bluetooth and Wi-Fi connectivity for better performance. Sporting a 5 inch AMOLED super sensitive touch display, it is efficient of featuring clarity in views and provides needful light balance for better visual experience. Supported by Corning Gorilla Glass 3, this smartphone gets the best protection and is going to be sturdy enough.  Running a quad-core Qualcomm processor, it gets the support of Adreno 304 GPU and 1GB RAM. Its 8MP rare and 5MP front camera get the support of various imagery apps along with flash light support.

The specs at a glance:

How to Restore a Faulty SSD on Mac?