iPad it is generally a tablet computer and it was designed and marketed by “Apple Inc”. The first i-pad was introduced on April 3, 2010.I-pad uses “IOS” as their operating system and it is used for internet access like web browsing,Emailing and for other entertainments like games, video shoot, playing music, taking photo, etc..,. I-pad mini is the one of the recent versions of I-pad model and which was announced by Apple on October 23, 2012 at California.  Apple provides I-pad mini with following features. The hardware features are as follows, 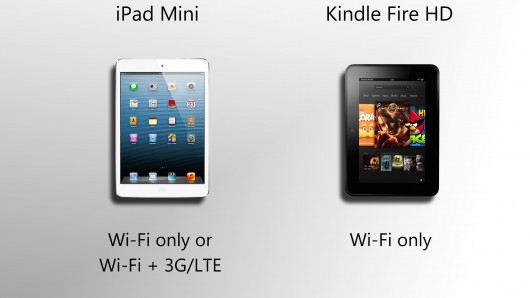 The software features are as follows,

The Apple provides many accessories for i-pad mini like Bluetooth, adapters and headphones.

Everyone has a wish to get HD entertainment in this present computer world. The i-pad mini and kindle fire are two products in recent trend satisfying the needs of consumers with different features. If we compare these two products, kindle fire HD is the best device to enjoy the wonderful HD experience because it has 33% pixels than i-pad mini, so that the picture or image will be more clear and sharp where in i-pad mini you cannot watch TV because it is not an HD device.  The sounding of the device is the most important thing; in kindle fire HD, the quality of sound is better than i-pad mini because it has dual stereo speakers. The cost of the kindle fire HD is low when compared to i-pad mini. In i-pad mini interoperability is limited because Apple products mostly can use only the Apple applications. Ultimately, the kindle fire HD is the best one to watch TV with HD quality, to access internet, to use social network from anywhere compared to i-pad mini.