Sony Xperia U is one of the three smartphone of the Xperia range that is launched by Sony without Ericsson. This phone was launched by the company at MWC that happened earlier this year. 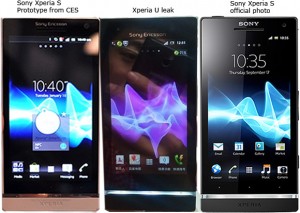 Upon looking the device very similar to Xperia S has the same identity design and has a special coating which is used to repel the dirt and dust. The illuminating strip that is situated beneath would change its color depending on what you are viewing. The bottom is available in a number of colors so that you can decide which suits you the best.

The body is made entirely up of plastic and the shape is pretty similar to the Xperia S. Sony is always successful in bringing in pleasing design and color scheme which appeal to the youth. There is a 3.5 inch display which is slightly lesser than the Xperia S. The screen resolution is 480X854 pixels and we think that the output rendering is done pretty well. The display is powered by the proprietary BRAVIA engine that is capable of rendering 16 Million colors at a time. The timescape UI has been improved and has got better in this phone. From phone dialer to the spacing of the characters on the keyboard, the 3.5 inch screen has managed to impress us.

There is a 5 Mega Pixel rear camera that is also equipped with a LED Flash. The camera has all the features which can be found in a typical 5 MP camera namely, Geo Tagging, Touch Focus, Face and Smile Detection, 3D Sweep Panorama and much more. There is a front facing VGA camera for you to make video calls and chats. The camera is capable of making 720p videos at 30 fps.

The device is powered by Android 2.3 and the company plans to ship out Android ICS in it. There is a Dual Core 1 GHz processor along with 512 MB RAM which is just sufficient to drive the heavy duty applications. There is 8 GB of internal memory and does have a micro SD card slot.

There is a lot of settings and customizations which you can do. You can easily integrate your Facebook account into the device itself. If any notifications are generated then they would be reported to you ASAP.

Besides this, you would get a number of data connectivity options such as EDGE, GPRS, Bluetooth, WLAN and USB. There are four sensors which are given by Sony. There is a standard Li-ion battery that is given with the phone and works fine when we used it. The battery needs to be charged once in a day if you use this phone normally.

Overall this phone when launched, has to compete with the likes of Lumia 800 and Samsung Galaxy Ace 2. There are a number of other alternatives which are being planned for the same price bracket in which this phone would be launched. We are still fans of this amazing phone where you can customize the outside as well as inside. The Sony Xperia U was launched at MWC 2012 but is expected to be officially out in the second quarter of the year.