We are quite familiar with different Social Media Network sites. Facebook and Google Plus are very common among them. The competition among these social media sites has been increasing day by day. With Google Plus, Google is basically trying to compete with Facebook and other social media sites (Twitter, LinkedIn). This competition has created a kind of war among different social network sites. Initially Google Plus had “invite only” feature but now it is publically available for all. Nowadays, every social networking site is trying to surpass the other networking site by developing some new and extraordinary features. 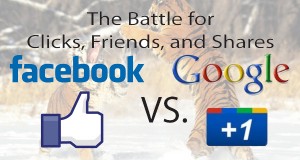 Significance of both the sites:

Well both the social sites have their own significance, so it is too early to say that which one is better. So, we will have to wait for some time to know, who will be the real winner (Facebook or Google Plus). Let’s discuss some of the stats of Facebook and Google Plus.

Comparison on the basis of Stats:

Facebook has over 900 million users to its network, where as Google has over 170 million users on Google Plus. So Facebook is way ahead from Google Plus as far as numbers of users are concerned. Facebook is considered as the most successful website in the social media. But Google Plus has also gained so much popularity in the short span of time. At present, only Google can challenge Facebook in the social media war because both are the biggest internet companies around the globe.

Past Inventions made by Google:

Earlier, Google has also launched different social network sites in the lights of Orkut and Google Buzz. But both these sites failed badly. So, Google Plus is the latest invention by Google to compete with other social media sites. Initially, people used MySpace and considered it as the biggest social media website. But with time many people switched to Orkut. And after the boom of Facebook, almost everyone has switched to Facebook, leaving Orkut, myspace and others much behind. No doubt, Facebook has some extraordinary features and applications, which were not present in the Orkut and other competitors.

Inclusion of Search Plus:

With the inclusion of things like Search Plus your World and +1 for third party sites, Google has increased the role of Google plus in the search world, although some people have reservation as they call it forced inclusion but somehow its helping a lot in providing more accurate and more personalize results to the users.

I will conclude this topic in this way that, Facebook is a fully functional social network site. On the other hand Google Plus is still in its early days. But still, Google Plus is trying hard to compete with Facebook by developing new features and applications. So, in coming days we can expect tough competition among these social website. But at the moment, it seems that Facebook is doing a bit better than Google Plus because of its largest user base and expertise in the social media world.

Tracking Your Blog Comments with Tools – 7 Best Ones