It’s not often that we are surprised by a new gadget, but when we started taking pics with the J1 there was a moment when we were just amazed.

Is the screen at the back really this good? How does it get these accurate light measurements? Why is it so fast? It turned out that a minimal amount of effort on our side was rewarded with maximum results. 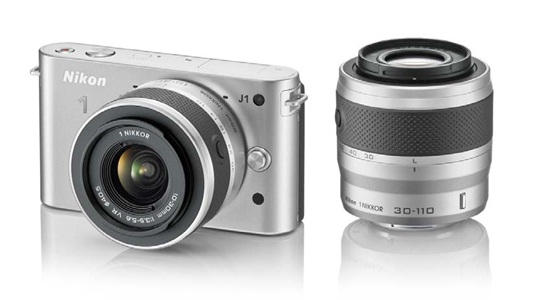 Small in stature, not in nature

Put the J1 next to Nikon’s D3100 entry-leveld SLR and the size difference is very noticeable.In fact, comparing body size, the J1 is the same size as Canon’s G12 compact camera, just thinner. The trouble becomes apparent when the additional lens is factored in, making it not pocketable if the lens is added (except perhaps with the smaller 10 mm lens). But this interchangeable lens is, of course, one of the main differences between the J1 and its compact competition.

Despite its plastic body, the J1 looked extremely stylish thanks to its minimalistic appearance (at least at the front) and also felt solid in hand. Nikon could have done more for a better ergonomic grip, while the ﬂush buttons on top (power, video, shutter) could have been more pronounced. The J1 carries for the mostpart the same functionality as larger entry-leveldSLRs, while also making functionality readily available via buttons on the back, although a physical mode dial (for selecting P, S, A, M,Auto) is missing. We also sorely missed a manual focus ring on the lens. For the Nikon owner who already has a number of older lenses available, there is a mount adaptor(FT1) available for the Nikon 1 mount.

“A minimal amount of eﬀort on our side was rewarded with maximum results.”

A solid 460 000 pixels on its 3″ LCD screen(although not fold-out as the Sony NEXrange) did an excellent job at displaying images and videos – much needed since no optical view finder is present.

So what are the differences between the J1and Nikon’s other camera in the 1 range, the more expensive V1? Count in higher pixel density on the back LCD screen, an electronic view finder, a magnesium body that’s also bigger in size, a multi-accessory port and a dust reduction system. That said,the J1 comes with a flash, and a very decent one at that, while the sizable difference in price – R9699 vs. R6800 also needs to betaken into account.

If you are looking to progress from a compact system to one with interchangeable lenses, without struggling with a large device, the Nikon J1 comes highly recommended. It’s compact, very responsive and required very little input to capture some good quality images. Visit www.nikon.co.za for more info on the Nikon J1. [MJ]

Nikon 1 ‒ the jump has been made

Nikon has introduced its mirror less1 range in SA, so what is Canon going to do?

Small has become big business in the last few years, most particularly, in the realm of cameras. While compact cameras are theobvious go to devices for those seeking tocarry a small and low weight camera around,their biggest disadvantage, which sets the apart from their larger DSLR siblings, is the irinability to accommodate multiple lenses.

Into the chasm between the two, the MicroFour Thirds mirror less standard (and others) stepped three years ago, offering the best of both worlds – small camera bodies with an array of interchangeable lenses. It was done by removing the reﬂective mirror found in dSL Rsused to project light to the view ﬁnder. Prime examples of this include Olympus’ PEN E-PL2and Panasonic Lumix DMC-G3.

Making a move, and waiting

Two big players in the photography ﬁeld were noticeably absent from the move towards these smaller-sized cameras – Nikon and Canon.Until now, with Nikon’s introduction of its Nikon1 system. “This is Nikon’s most signiﬁcant announcement since we introduced the digital camera 14 years ago,” said Takami Tsuchida,the president of Nikon Europe. It’s also Nikon’sﬁrst change in mount in 50 years. 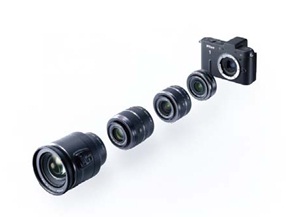 With two models available, namely the Nikon J1 and V1, and four NIKKOR lenses on offer,Nikon’s system looks set to make some nice in roads.

The question is of course, how is Canon going to respond? As Nikon’s main competitor,the company has always had a “we’ll jump if they jump” approach to the mirro rless standard. To be honest, we can’t wait to see what Canon will come up with, since Nikon has set a very decent standard. Nikon’s move also does not bode well for companies such as Olympus, Panasonic, Samsung and Sony,who’ve up to now had free reign over the(limited) mirro rless market.

One Plus X Specs, Features and Price