The technology is progressing day by day and all the people around the globe are getting mad behind the technology. The tablets are developed each and every day. Now the craze of the Google’s operating system Android is increasing day by day and all the major manufacturers like Samsung, Asus, Motorola are developing the new tablets, based on the Android. Asus has  been progressing in this field and has launched its Android based tablet, Transformer Pad infinity.  If we talk about the competition in the field of tablets, then the Apple is a very tough competitor of  each and every tablet and same is with the Transformer Pad Infinity as well. Now this great competitor of the Asus has again come with the new launch and this time it is iPad 3, which was launched a few days back. Asus Transformer Pad Infinity  is also a new tablet and everybody is expecting a great competition between  both the tablets. If you are planning to buy a tablet for you, then you may get confused that which one you should opt for. So in this post I am going to post the comparison between both the tablets. 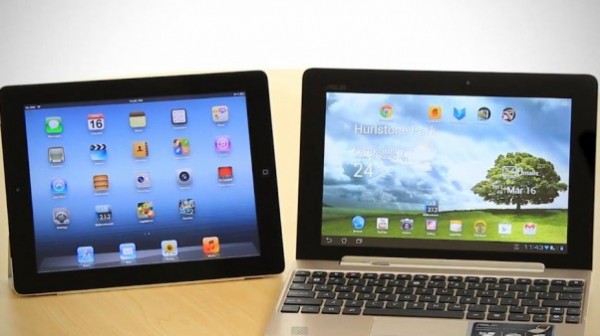 The Asus Transformer Pad Infinity Pad 700 has got a sleek and trendy design. The Asus has worked very hard on this part, as every user first check this part and then only the features come. The dimension of this tablet are 263 x 180.8 x 8.5 mm. The weight of the tab including the battery’s weight is 586 g.

Apple has bring the Retina technology on the new iPad 3. The Apple has come with its latest display technology with the iPad 3 and both the resolution and pixel density are far better than the Asus Transformer Pad Infinity 700. The resolution of the iPad 3 is 1536×2048 and the pixels density is 264 ppi.

The transformer Pad is the android based tablet and runs on the Android 4.o, Ice Cream Sandwich version. The process is quad core, which is clocked at the 1.6 GHz speed. The RAM in this tab is 1 GB and comes with memory variants of 32 and 64 GB. The memory can also be expanded to 32 GB more, with the SD card.

The Apple iPad3 is also based on the dual core processor, which is also clocked at the 1 GHz speed. But the new chipset that is A5X, makes it better than the Asus Transformer Pad Infinity 700. The quad core graphic processor is also there in the iPad 3. It  comes with the memory variants of 16, 32 and 64 GB, but there is not any support of the external SD card slot. The RAM is 1 GB in the iPad 3 as well.

The camera in the Asus Transformer Pad 700 is of 8 Megapixels quality and it supports the high definition video capturing. The auto focus and LED Flash are also the features of the camera.