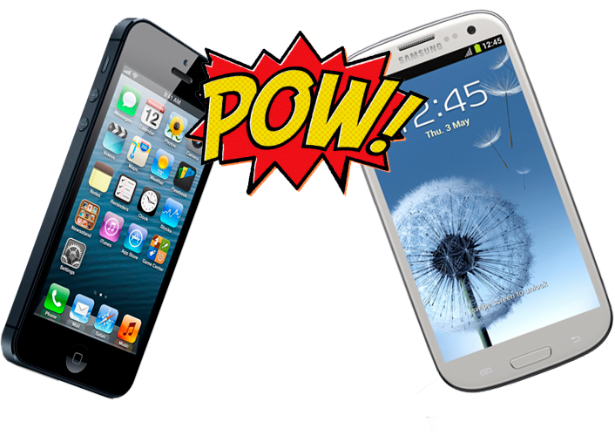 Verizon, AT&T and Sprint offer 4G LTE connections to both the iPhone 5 and the Galaxy. The phones should offer the same connection speed, but there are some differences. Overall, the iPhone 5 downloads faster than the Galaxy at peak levels, but the iPhone 5’s speed can vary greatly. The Galaxy offers more consistent speeds, which is preferable to the iPhone 5’s unpredictable speeds. There are also reports that some iPhone 5 users experience Wi-Fi connectivity problems.

The iPhone’s iOS 6 Maps app had some serious issues upon its release. The iPhone 5’s Maps app can have problems searching for businesses, and it even shows Texas as having two capitols. The Galaxy’s Android Maps provides accurate directions, and it provides a picture of the destination when you get close to your destination. The Galaxy wins hands down in the maps category because the iPhone 5’s Maps app is unreliable.

The iPhone 5 offers an excellent battery life, but the Galaxy uses a 2100 mAh battery, boosting its battery power to superior levels. The Galaxy’s battery can typically last slightly longer than the lithium-ion battery in the iPhone 5. The Galaxy also offers the option of switching out the battery to provide extended battery power when on the go. There are ways to maximize the battery life of both phones. To conserve battery power you can turn down the screen brightness and only turn on the Wi-Fi, GPS and Bluetooth capabilities when you need them.