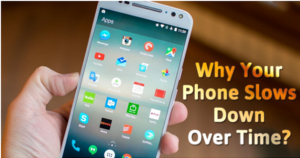 (Source)
Is your phone not performing well like how it was when you bought it? Has it slowed down a lot? Well, this is a common problem that owners of both Android and iOS phones face, a bit more pronounced in android phones though.

Today, smartphones are used by almost everyone not just for calls or text messages but also for a wide range of purposes, including listening to music, taking pictures, watching videos, playing games, and even for storing very important data and information. So, it’s only natural that we keep adding more and more apps until the phone’s storage can hold no more.

We are used to getting information from our phones at bullet speed and when that doesn’t happen, it becomes quite frustrating for some. Just like we slow down with age, smartphones also slow down over time. There are many reasons why the performance of these phones degrade as time passes. Let’s explore five of these reasons:

With each update of the operating system, the computing power as well as the number of resources needed to increase to ensure smooth functioning of the device.

If you have updated your device’s operating system, chances are that these updates are not effectively optimized for your device and your device is not able to handle all the overload, causing it to slow down.

The best way to prevent OS updates from slackening your phone is to avoid major OS upgrades and go for smaller ones. You can choose to use the older version of the OS and should you want to enjoy the features of the newer OS upgrades, we suggest that you upgrade your Android or iOS device.

The apps that you install on your phone, although lightweight initially, become heavyweight gradually as they keep adding new features and updates over time. Every new app update, that is released, brings in new features that take up a lot of storage and memory.

As newer and faster smartphone hardware are developed, the apps are also upgraded to deliver optimum performance for these phones and unfortunately, these updates exhibit a poor performance on older devices.

The best solution for this issue is to replace bloated apps with lighter-weight substitutes. Sometimes you can find an older version of the app and as long as it doesn’t pose any serious security threats, you may use it on your device.

Phone’s Memory is Filled Up

One of the main factors that cause slowing down of phones over time is the filling up of the phone’s memory with apps, photos, videos, cached files, and what not.

As the internal storage of the device gets filled up, the performance of the phone also becomes slower and duller. If you notice an unexpected performance drop in your phone, freeing up some space might help to speed things up a bit.

Smartphones use Flash memory or NAND that requires enough free space to perform competently. With time and usage, a degradation in NAND memory will take effect.

Each type of NAND memory has write cycle limits per memory cell and once this limit is reached, the cells start to wear out, hence affecting the performance.

Too Many Apps Running in the Background

As mentioned earlier, to enjoy the features and benefits of various apps, people keep installing more and more apps on their phones. Majority of these apps run in the background, utilizing the resources and memory of your device and slowing it down.

For example, Facebook is always syncing in the background, email apps keep checking for new emails, and if you have home screen widgets and animated live wallpapers, they are also taking up a lot of resources for their functioning.

You can solve this problem to a great extent by disabling or uninstalling all unwanted apps that drain battery power, switching to static wallpapers, and disabling all widgets.

Too Much Bloatware in the Device

A major problem with Android phones is the increasing bloatware that occurs when various manufacturers add a lot of apps to the basic ones that initially came with the device. These apps slow down the device by taking up its resources and CPU cycles.

While you probably won’t be able to uninstall these apps directly, you can always disable them. For this go to Settings  Apps and then select the app you want to disable.

If you are carrying around as low and underperforming smartphone and no remedy seems to work, maybe it’s time you considered a factory reset. With a factory reset, everything in your device gets deleted and you’ll have to start setting it up from scratch.

Make sure to backup all important data on the device before a factory reset is performed. If you are an android user, Android USB Drivers can be used to transfer data from your phone to your computer for effective backup.